As recently reported across the vast digital landscape, many SEOs and webmasters reported some major ranking activity in Google SERPs over the weekend, similar to what was witnessed just the previous weekend. Though many of us perceived this to have been a potential major update to the Penguin algorithm, Google were quick to quash any such rumours with Gary Illyes indicating that the consequence of these fluctuations was as a result of ongoing updates to their Core Algorithm.

Despite the impending arrival of the next update to their Penguin algorithm, it’s possible that these common core ranking algorithm updates may be being rolled out as an early warning sign to prepare SEOs and webmasters for the expectedly significant effects of the next major Penguin update. Without succumbing to speculation, it’s worth considering that ongoing updates could be the search giant’s method of fine tuning their Core Algorithm in order to enable Penguin to operate more efficiently, or become more discriminatory to further improve the quality – and accuracy – of search results for any given term. Although we are yet to fully understand what the true impact of these updates are to the world of SEO, we can infer that there’s likely to be some wholesale changes when the Penguin update is rolled out.

What have we seen?

From an agency point of view, we’ve seen many positive movers over the past couple of weeks with some really quite noticeable increases to many of our client’s rankings, as shown in the image below. 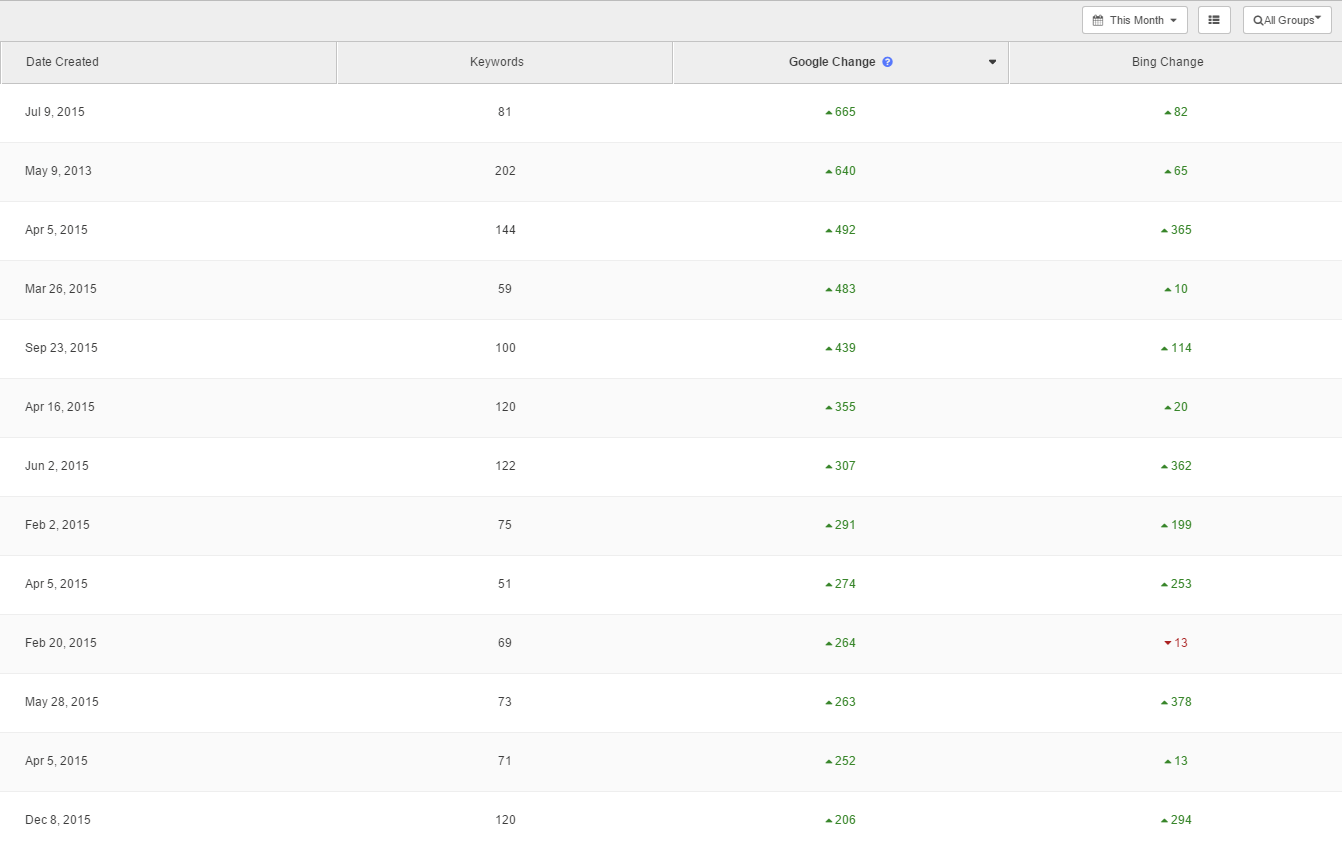 As can be seen from the above image, there has been a major uplift in organic rankings for many of our clients’ sites that we track in our self-developed ranking tool. Though we can see also see an increase in rankings in Bing, we can clearly discriminate between the two by looking at the ranking fluctuations over a set time period which would indicate that such movement is consistent with this month’s two confirmed updates to the Google Core Algorithm. 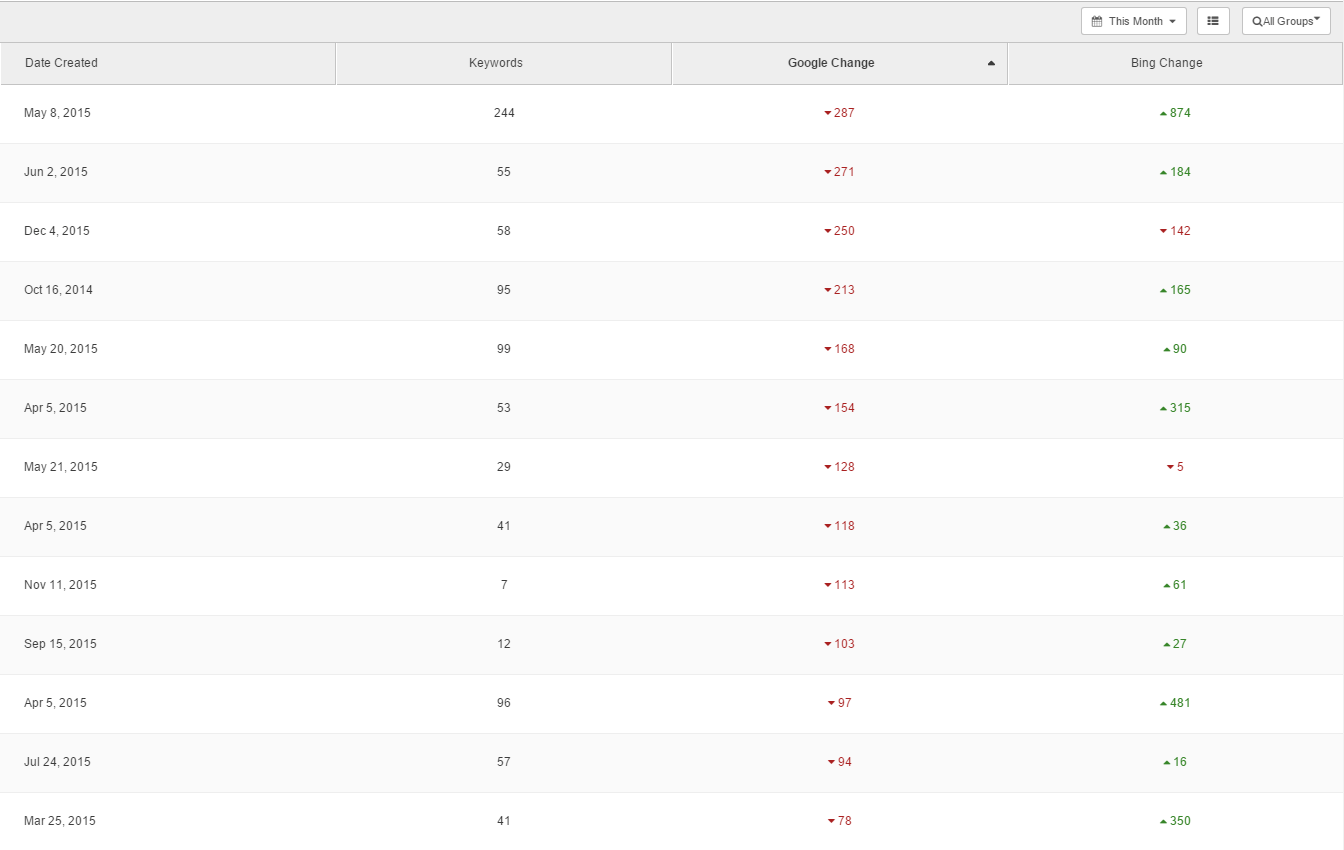 To further prove that these sudden increases were as a consequence of the Google Core Algorithm update and, if we look at the some of the negative movers that were tracked, you can clearly see that despite a loss in positions in Google, almost all campaigns in the below image demonstrated an increase in rankings in Bing (as shown above). As such, we can now confirm the notion that the cause of these fluctuations was Google specific.

By drilling down into the campaigns that demonstrated the greatest increases across the board, this evidence only serves to prove that this uplift was as a consequence of this weekend’s Google update. In fact, the graphs (above and below) clearly demonstrates huge increases on the days that the Core Algorithm was updated and has shown further positive increases since.

With the Google Panda algorithm now fully integrated into the Core Algorithm, it’s possible that these changes may pertain to the quality of site content – particularly since we have encouraged many of our clients to refresh their site content in 2016. Not only that, but with this integration, Google are now unlikely to specifically release a major update to their Panda algorithm, as any change to their Core Algorithm will inadvertently update Google Panda too. So although we can’t necessarily interpret this as a major update to Panda, we can rationally assume that Google is further tightening the screw on what it defines to be quality and relevant content.

Don’t fear though. Such volatility in the search results over the past couple of weeks should simply be used as a guideline to determine whether you can panic or relax when the next Google Penguin update is confirmed. However, providing that standard and best practice is followed on a consistent basis, there should be no need to worry as it’s likely that many of us will have already made efforts to switch to a more natural strategy.