Happy Belated Birthday to the WWW.

Rewind 25 years ago on August 6th 1991, when Sir Tim Berners-Lee changed the world as it was once known by creating and launching the first ever public website.

A graduate of Oxford University, Tim Berners-Lee invented the Web while at CERN, the European Particle Physics Laboratory, in 1989. He wrote the first web client and server in 1990. His specifications of URLs, HTTP and HTML were refined as Web technology spread.

The website was a basic text page with hyperlinked works that connected to other pages. Berners-Lee announced the project on a Usenet group, and according to a source it wasn’t until August 23rd that new users visited the site. However the launch effectively marked the start of the web as a widely available tool.

You can still view the web page here but be warned you won’t find any spinning GIFs or ‘like’ buttons – simple text and hyperlinks.

With the design and creation of websites being one of our core services, we wanted to celebrate the milestone by looking back on some of our favourite brands’ first websites and some facts on the WWW in 2016.

Over 1 billion websites existed as of September of 2014, as confirmed by NetCraft in its October 2014 Web Server Survey.

The below tweet was from the inventor of the World Wide Web, Tim Berners-Lee)

http://t.co/D9pwMXuZOa recently passed a billion websites by their count….

The WWW was invented in March 1989 by Tim Berners-Lee. He also introduced the first web server! The first browser editor (the “worldwideweb.app”), the Hypertext Transfer Protocol (HTTP) and, in October 1990, the first version of the “HyperText Markup Language” (HTML) See Tim’s original proposal here.

The 1 billion website builds statistic saw a decline (due to monthly fluctuations in the count of inactive websites) before reaching and leveling above the 1 billion mark in March of this year.

Flash was introduced by Macromedia in 1996.

In the year 2000, Microsoft Internet Explorer 5 become the first web browser to achieve better than 99% support for CSS1. 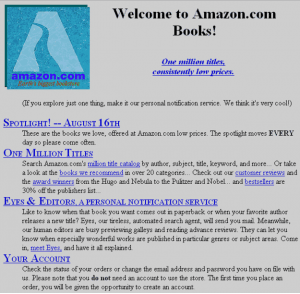 Amazon’s home page from 1994 looks strange compared to the image-heavy homepage we know today, but shows that customer recommendations are still a strong focus for Amazon. 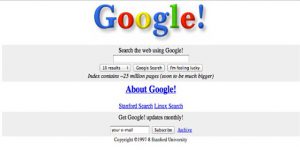 In 1998, Google’s homepage shows how different the slimmed-down page we look at today, but it also shows how far Google how come in terms of the suite of Google services we enjoy today! 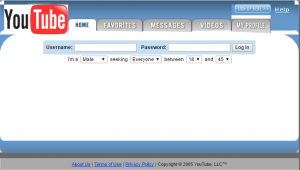 The Youtube’s first website went live when the company was still operating from a garage. 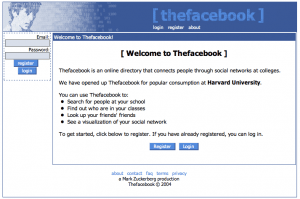 The launch page for TheFacebook – Mark Zuckerberg’s site was only for college students at Harvard. It spread via other colleges, then became open to everyone in 2006.

It’s impossible to imagine just how different the world would be, today if Tim hadn’t have launched the first ever website 25 years ago. You’d probably be reading this blog via Usenet.

So please join us in saying Happy Birthday to the World Wide Web; here’s to 25 more years of things changing in the world of technology. I can scarcely imagine what it’s going to look like, but keep an eye out for our web predictions in the coming months.