What Influence has Social Media had on the EU Referendum?

Over recent weeks it has been almost impossible to avoid talk around the EU Referendum, as everyone across the globe has given an opinion on whether the United Kingdom should remain IN or vote OUT of the European Union. But what role has social media played in the campaign?

According to the Electoral Commission, last year saw the Conservatives spend over £1.2 million in the build up to the General Election on Facebook, while Labour spent just under £16,500. This disparity widens even further in regards to Google Advertising as the Conservatives spent over £312,000 compared to Labours £372. So with only a few days to go, what can social media tell us about the EU Referendum?

The power of social media

According to data from Brandwatch, which have crawled millions of tweets over the past month, there have been over five million mentions around the EU Referendum which is a staggering number!

Brandwatch data also shows the political figures being mentioned in relation to the EU Referendum debate, and it comes as no surprise to find David Cameron at the top of the list. What is perhaps surprising is that Jeremy Corbyn falls behind US Presidential hopeful Donald Trump: 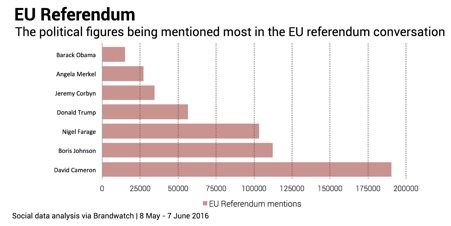 As you can see from the statistics above, Brandwatch identified that on the voter registration deadline there were over 30k mentions of people talking about registering on the day. On top of this, many called for the deadline to be extended after reported problems with the website being used to register. This was granted and as a result deadlines were extended to the end of 9th June.

While it’s a massive talking point – both in print and online media – the amount of traction being given on social media to talk around the vote is astronomical. Of course, none of this information indicates whether the UK will remain IN or OUT, but the stats are very interesting to see and the data received shows the fact that leave-related hashtags are DOUBLE the rate to remain ones. Food for thought there…

“Facebook is the prime social media platform. There’s a massive bias towards Facebook; we think Twitter is more of an echo chamber for Westminster and journalists,” he says. “Both campaigns have £7m to spend and we’ll be putting a significant chunk of that into Facebook.”

It’s clear to see both sides are mainly using the Facebook platform to encourage people who already support the chosen campaigns to vote rather than attempting to change people’s minds from the different camps. As such, the social media campaigns have been more about showing that their vote matters and attempting to motivate them.

While the majority of people have seemingly made their mind up on a knee-jerk reaction, online advertising has become an efficient way of hitting key demographics and educating them directly and in different ways and means. The logic makes sense, as the online space is great to sell your message with much less restrictions and more defined audience and hyper-targeted demographics.

So, in light of these facts, it will be interesting to see how much traction social media has influenced potential voters. We are in the midst of a potentially world-changing vote and the past few weeks have proven to be very interesting.