With the dramatic 2015/16 Premier League season having reached its climax, we’ve devised a digital league table tying together a variety of data from last season’s teams. We’ve found out if the on-field heavyweights are as dominant online, and whether the league’s strugglers can at least boast a strong digital presence. Here’s how the Premier League table looked at the end of the 2015/16 season: 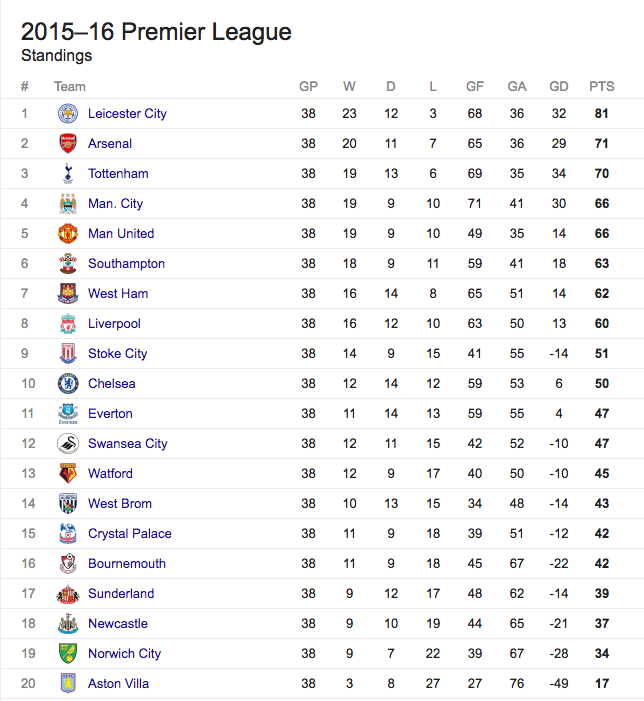 What did we do?

Why did we carry out this analysis?

We wanted to explore where individual clubs are flourishing online and the area’s where their digital presence could be significantly improved. We also wanted to see whether the clubs with the biggest budgets, most on-field success and largest fan bases were consequently making the biggest waves in the digital landscape, or if they were being outdone by clubs further down the league table.

How did we carry out the analysis?

We decided to examine 4 key digital areas, with several different metrics within each section. Our team then researched the accurate, up-to-the-minute data for every one of the Premier League clubs.

Which metrics did we analyse?

We examined a range of metrics, many of them interrelated, such as – number of Tweets and number of Twitter followers – and – pages indexed and SEM rush keywords.

How did we assign points to each club?

We ranked every club with their effectiveness in relation to their competitors on each metric – awarding the performer(s) with 20 points and the worst with 1 point or less in some cases. Then we found each team’s average score and placed them amidst the other 19 clubs to give them an overall league position.

So, for the SEO review, we analysed four key ranking metrics within this field: Domain Authority, Referring Domains, SEM Rush Keywords and Pages Indexed. Through this analysis we wanted to judge whether the Premier League clubs were as good at SEO as they are on the field.

The Domain Authority collects together an overall rating of a site, based on the rankings of its pages. Manchester Unites, Arsenal and Chelsea are at the top of the table for their DA, with Premier League winner, Leicester City, sitting rather low down at 14th. This is because a lot of reputable sites are linking to their pages (and vice versa). It’s also due to the fact that these clubs post regular content – meaning that Google’s ‘spiders’ are regularly caching this fresh content to update their search rankings for a given search term.

It is no coincidence that the sites with the highest DA are the ones with the most Referring Domains – these are the websites that post backlinks; links on other websites which link back to your own site.

These clubs – the same top three from the last paragraph – are clearly producing good content which others are looking to share. Similarly, their quality of content also means that other respected websites are hosting backlinks to the sites of those teams. A special mention too to Newcastle United, whose referring domains made the top 10, far above their disappointing Premier League position.

Finally, we looked at SEM Rush Keywords and Pages Indexed. SEM Rush keywords cover all the keywords which Google has indexed on a particular site, whilst page indexed is simply the amount of your pages which can be reached by searches on Google. Relevance, good quality content and even intelligent organic link-building are all significant factors here.

In the website review section, we have analysed the performance of each club’s website itself, examined the functionality of the IP address, and whether or not they have a mobile site, and how it performed.

When it came to testing the website performance of each of the clubs, we used the Pingdom website speed test tool. The tools gave us details on the amount of requests the website had, the page load time and the page size. It then gave the website a rating out of 100. The page load speed of a website is hugely important, especially when it is getting a huge amount of traffic, like football clubs will do. Just to give you an example of the importance, Walmart said that for every second they took off their site load time, they experienced an increase up to 2% in conversions. This returned some very interesting facts, as Arsenal were bottom of the table, while Aston Villa, Bournemouth and Sunderland all sat in the top 10.

When ranking for the club’s IP Address, we gave -10 to clubs who shared a server with any of the league’s other clubs or any other websites, because the fact that site problems can occur as a result of sharing a server, and having your own server is a mark of prominence. Surprisingly, there were only 8 clubs that has their site hosted on their own dedicated server. All the others that share their servers with other websites are running the risk of adding extra problems to their site.

As expected, every single one of the clubs have a dedicated mobile site. In this day and age, this is essential and with the amount of traffic that these clubs will get, it’s a given. 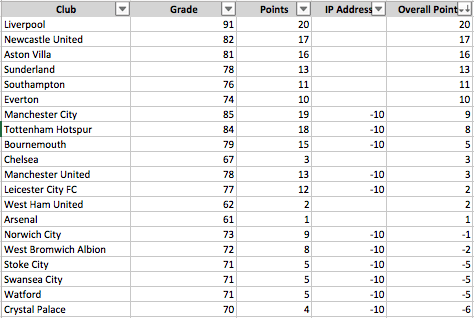 When it comes to the review of each clubs blogging, we decided to base it on who had the highest shared piece of content. To find this out, we used the very useful tool, Buzzsumo. It is very important that site is putting out regular blogs as the more you put out, the more likely it is for Google to crawl your site and reward your good content. Also, the more active you are with your blogging, the more likely people are to take notice and keep returning, thus increasing your traffic.

Although the quality of the blogging by each club is subjective, we can clearly see which club gets the most activity on their blog via the shares. Arsenal came on top this time with their highest shared post achieving a whopping 279.2k shares. One thing we can see from the blogging review is that the amount of shares each club is receiving is relative to the size of their fan base and how regularly they are pushing out new content. The bigger and more active clubs are receiving higher volumes of traffic and interactions through their blogs.

For the social review, we analysed the following social factors: Twitter Followers, Facebook Likes, Instagram Followers and YouTube Subscribers. We then added all these followers together to get a total following for each club and then gave out the points based on this. We also took into consideration how active each club is on the given social platforms.

Although Manchester United came out on top for the total following, they were the only club to have no YouTube channel what so ever. We found this rather strange as YouTube is a great platform to use as it is all video content and therefore different to the other platforms. When it came to YouTube, Manchester City not only has the most subscribers, but also utilised the channel the best out of all the clubs. Every week they do something called a tunnel cam, where they film everything that goes one the tunnel before, during and after the game. They also have a weekly vlog called Inside City, which gives fans the chance to look at what goes on behind the scenes every week at the club.

Instagram is a perfect tool for football clubs due to it being a fast paced, image-based platform. Therefore, it was a big surprise when we saw that one of the biggest premier league clubs, Newcastle United, had only posted 85 times on their account, compared to all other clubs who ranged between 500-6k.

As for Facebook and Twitter, the fact that they have hundreds of millions of users means that every Premier League club, has, understandably, built up a page that is regularly updated with fresh content. As expected, the bigger clubs have the bigger amount of followers/likes. However, all the clubs are very active and utilising the mass amount of users to its full potential.

Overall, there were some surprises, but as we expected, the most successful and best supported clubs, such as Liverpool, United and Arsenal, had the combination of Digital nous and large followings which allowed them to top the table. Liverpool’s consistency throughout all of the four tests we ran, led to them finishing top of the table. Both relegate clubs Newcastle and Aston Villa, managed to grab a spot in the top half of the table, finishing 9th and 10th. Our three relegated clubs were Crystal Palace, Swansea City and Watford, who all performed rather poorly compared to the rest of the Premier League clubs.

Digital NextMobile
What are Progressive Web Apps and will they be beneficial?